For my HCI Masters Project, I pursued a research project to investigate multimodal interaction in Network Visualization. Specifically, I studied how the individual modalities, Speech and Touch, lend themselves to Network Exploration tasks as well as the effects of priming with one modality when it comes to using both modalities in a multimodal system.

I collaborated with a PhD student in the Vis Lab at Georgia tech. He had created a multimodal system for network Visualization called Orko. He had conducted preliminary evaluations of the system earlier.

As part of my objectives, we wanted to take a closer look at really understanding how these modalities were utilized, and came up with the bunch of research questions outlined below.
‍
Objectives

I made improvements to the multimodal system that was already built, based on the feedback from the previous evaluative user study.

In order to truly understand how Natural language and Touch truly support interactions individually, I derived two new systems that were functionally equivalent to the multimodal system supporting interactions only via Touch and speech respectively.

This gave us the ability to deeply investigate the individual modalities as well as set us up for studying priming effects of one modality in how a multimodal system is used.

I designed an experiment to answer our research questions mentioned above. I recruited a total of 18 participants and split them into 3 groups of six each. 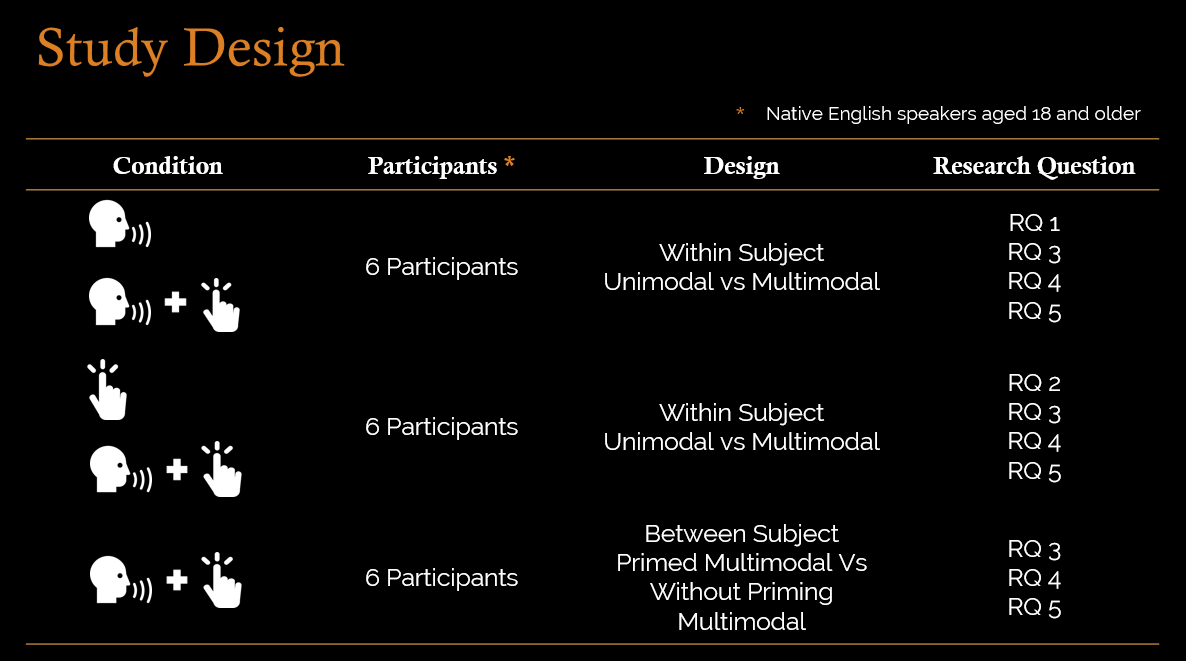 Design of the study as it relates to the research questions

I designed a total of 6 tasks for each system, 5 of which were close-ended and one was designed to encourage open exploration of the system. The tasks also were constructed with an aim to span a set of common network exploration tasks (finding nodes, finding connections, finding paths, filtering nodes, visually encoding nodes, etc.). Participants could choose any of the above operations supported by the system to complete a specific task.
‍
In order to really achieve our objectives of understanding the modalities and how they are utilized in the system, the tasks used in the evaluation needed to have the following characteristics:

Pick any two airports that have at least one direct international flight. Consider these two airports and the airports they have direct flights to. Now compare the two groups of airports with regard to
Accessibility
Altitude ranges
Variety of time zones
You may also list any additional observations you make based on interacting with the network. 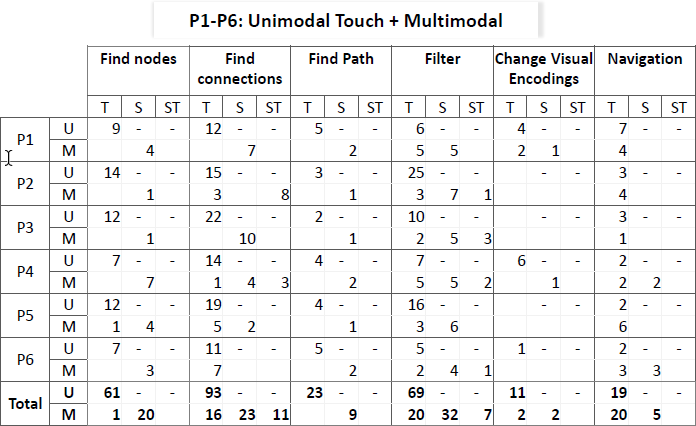 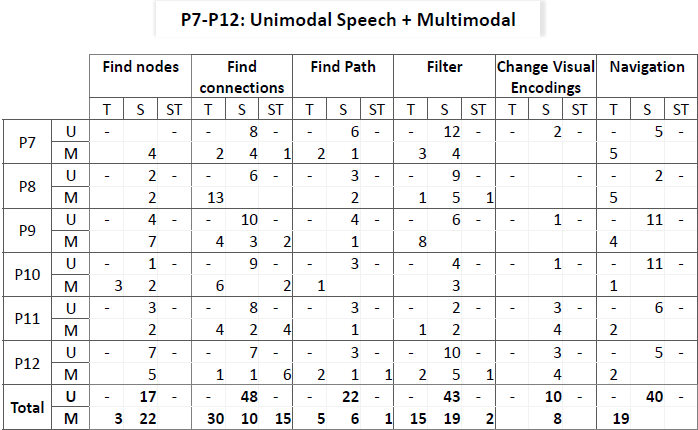 The combination is certainly better. Voice is great when I was asking questions or finding something I couldn’t see. Touch let me directly interact.

I liked that I could correct with touch. Because it’s not always going to be perfect right. Like the smart assistant on the phone sometimes gets the wrong thing but doesn’t let me correct and just goes okay.

I used voice when I didn’t know how to do it with touch.

It was somehow less complex even though more interactions were added.

Now that I think of it, not consciously but I did use speech to mostly narrow down to a subset and then touch to do more detailed tasks.

Working with the system for a while starts making you want to ask higher level questions and get specific answers or summaries as opposed to just the visualization.